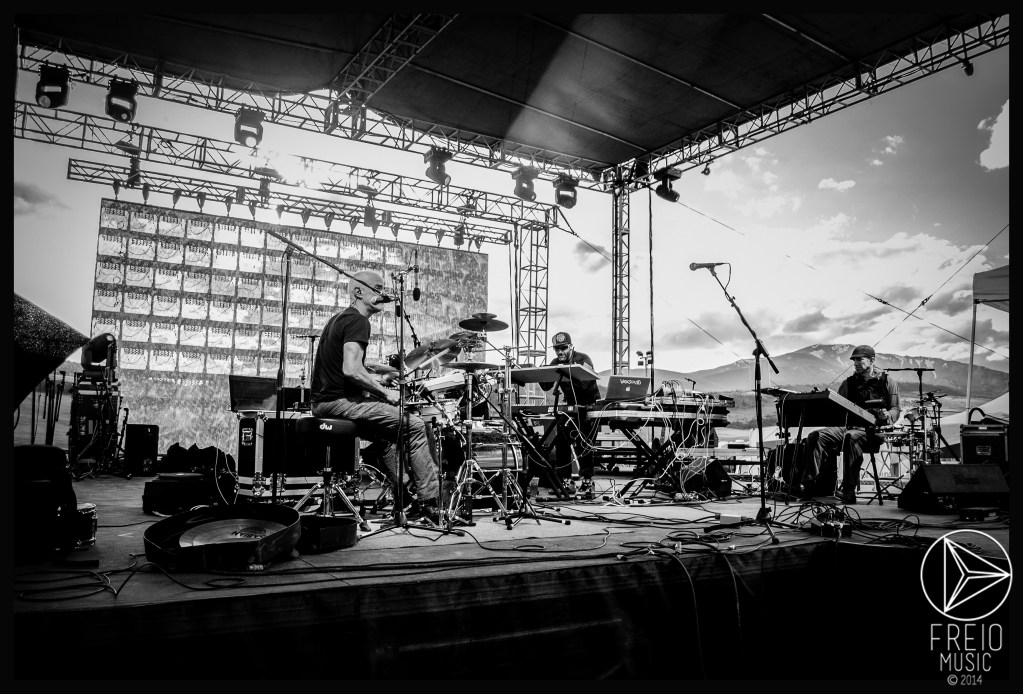 The 9th annual Sonic Bloom music festival took place over the weekend of July 19-22nd in the airy high desert of South Park, Colorado. The site, fully encompassed by the Rocky Mountains, created a beautiful backdrop of breathtaking sunrises and sunsets that lit up the numerous stages.

As usual, Bloom offered a plethora of experiences for every attendee. Music was continuously playing at various stages with the highest quality of sound. Workshops covering hooping, massage, dance, yoga, and many others were available and well attended. Outstanding visuals met the eye everywhere you looked, ready to be soaked in and admired, whether it be a performance, installation, or projection. 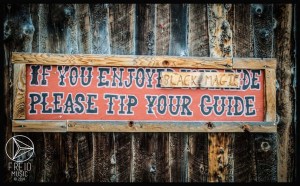 The weekend had much to offer, but you would have to have been a super human to experience it all!

Here are some highlights from throughout the weekend.

1. TWO nights of Tipper!! (not enough)
2. The Three Stages
–The Bloom Stage with the Funktion-One sound system and the massive LED screen backdrop.
–The Hummingbird Stage with the spinning woodcut mandala and unique handcrafted details.
–The CO Dome with its intimate feel and psychedelic projections by Illuminated Dimensions.
3.Surprise sunrise set by Kalya Scintilla and Kaminanda with an epic pink sunrise.
4. OPIOU.
5. Whitebear making everything so dark and weird at only 7PM, when the sun was still shining.
6. Kaminanda playing guitar live for the first and only time in Colorado, then busting out a cover of Grateful Dead-Shakedown Street.
7. The captivating “flower-dance-presentations” by Anthony Ward all weekend.
8. The Gong Experience that vibrates into your soul.
9. Quixotic’s unbelievably talented performers.
10. Looking around and realizing you love everyone and everything you are surrounded by!

The Lineup is Complete! 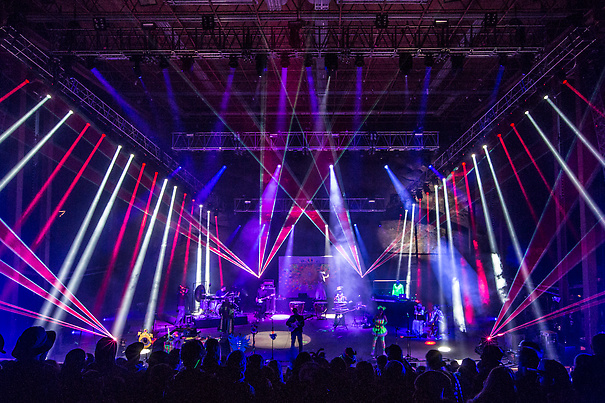 Shpongle (Simon Posford) joins the epic lineup for the Sonic Bloom 2014 festival! He will be playing alongside: Tipper, EOTO, Opiuo, The Polish Ambassador and so many more artists making this the most looked forward to festival of the summer!

In Colorado last weekend, Shpongle sold out the 9,450 capacity at Red Rocks Amphitheater. Then, following the concert was the after party at Cluster Studios, where: Plantrae, Snubluck, Digital Vagabond, Toy Box, Erothyme, Whitebear and Desert Dwellers tore it up until sunrise.

So, if you didn’t already do it, you better grab that ticket to this years Sonic Bloom because it will be four days of unbelievable magic you won’t be able to find anywhere else! 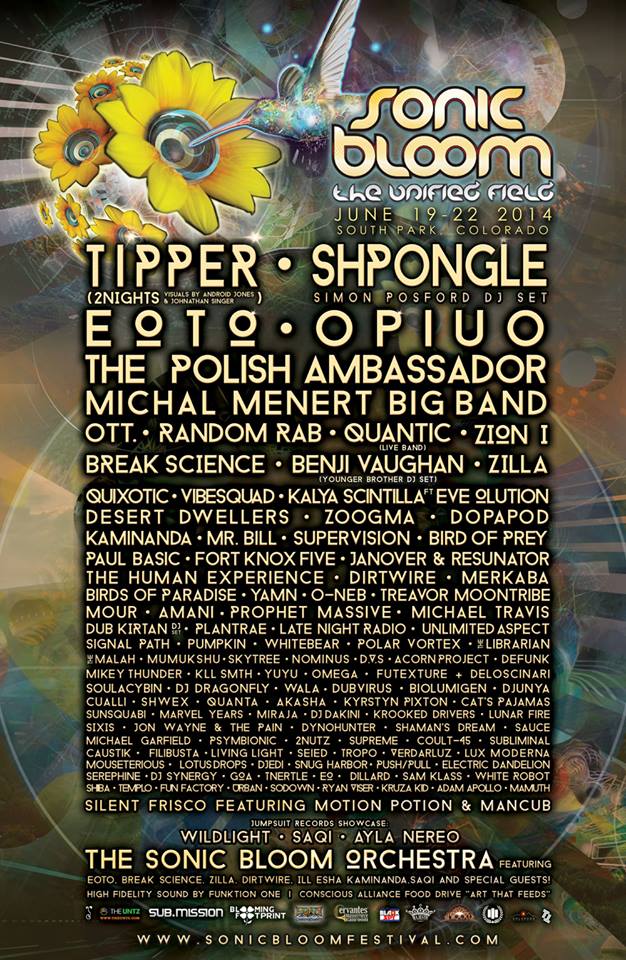 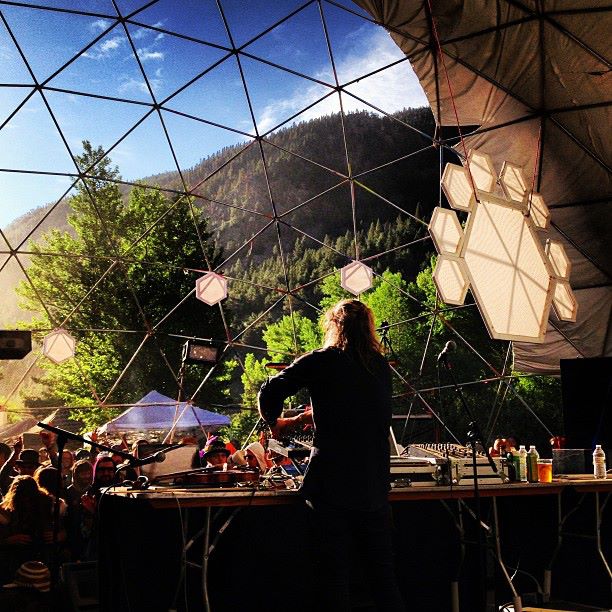 Sixty five days and counting down to the best festival in Colorado this summer! The lineup is stacked and another headliner is yet to be announced! The venue is new this year, taking place at the spacious American Safari Ranch in South Park, CO. The early bloomer and tier one tickers have quickly sold out and tier two is now on sale for $195. Get ’em quick before these too sell out and the price rises yet again! Included in your festival ticket is camping and if you feel like spending a bit more, you can purchase car camping or lodging available on site. Check out the lineup (below) and get your tickets, this is truly a festival you do NOT want to miss!

Get tickets and more information here! 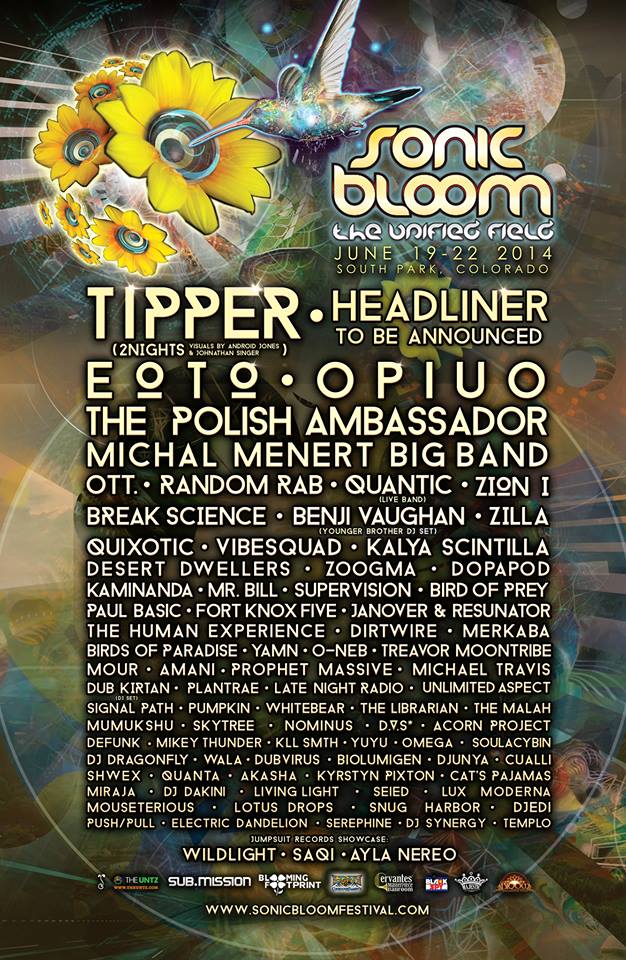