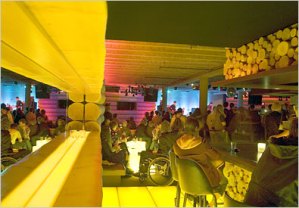 Intimate venues are hard to come by. A venue in which you feel some odd close connection to the artist. The Doug Fir Lounge in Portland, Oregon embodies this warm vibe while still upholding its ultra hip reputation. In one word the lounge could be defined as ‘swanky’. Dim lights created a mellow mood, but the vivid neon accents kept the room alive and rocking. The show? The Album Leaf with opener, Sister Crayon. Although the crowd consisted of mostly plaid shirts, facial hair, and glasses (aka the Portland hipster) the show was charged with unimaginable musical talent. Terra Lopez, the lead singer of Sister Crayon, began as a solo act with only a classical guitar and a loop pedal to create the dream-like impression her music leaves. With the addition of Dani Fernandez and Jeffrey LaTour the band united under a new holistic melding of sound.A sound that is beautiful, deep, and full. On stage, Sister Crayon comes to life and is incredible to watch despite the calmness of their music. You can see the passion behind it. Following, The Album Leaf brought a new presence to the stage. The stunning video display and LED vertical lights making shadows on the huge Fir beams beautifully paralleled the mostly instrumental melodies of the band. Their talents displayed an awesome attention to detail and knowledge of sound. The Album Leaf, Sister Crayon + The Doug Fir Lounge = One rad show. I would highly suggest putting on your ‘hippest’ outfit and making your way to a show in the basement of the Doug Fir. Best venue I’ve been to in Portland hands down.
[youtube http://www.youtube.com/watch?v=6BWRoYURh3U%5D